The Benefits of Ranking in Google’s Local Snack Pack

The Benefits Of Ranking In Google’s Local Snack Pack

In this brief post you will learn about the benefits of ranking in Google’s local Snack Pack.

It all started in 2006, when Google first launched its One Box with the goal to instantly answer or provide information for certain search queries, for example about the weather, stock quotes, and also local businesses.

Back then, the One Box was pretty ugly – I’m sorry, but there’s no other way of describing it – but it was highly useful and a very exciting opportunity for local businesses and SEO professionals alike.

The box, which provided 3 listing spots, was soon replaced by the 10 Pack. As the name suggests, the 10 Pack featured 10 different local businesses at once. About two years later, the 10 pack was cut down to 7 and in 2015, we first saw what is now known as the Snack Pack with no more than 3 available spots – back to the roots so to speak. 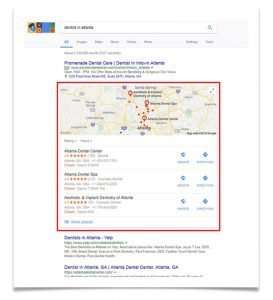 Why Your Website Should Rank In The Snack Pack

One could ask, why did Google cut back on the number of businesses that get featured in the local pack? Some critics say that the reason for the change is that it allows Google to make more advertising money with AdWords, which makes a lot of sense. Another valid answer is that 3 pack listings fit perfectly on a smartphone screen.

Anyway, it is what it is and we have to work with what we’ve got. And there are also positive aspects about a Snack Pack that doesn’t list more than 3 local businesses at the same time: Less competition which results in higher click-through rates and consequently more clicks. This, of course, benefits your SEO marketing strategy.

The obvious problem is that it’s much more difficult to claim one of the 3 remaining spots.

Pros Of Ranking In The Snack Pack

A Snack Pack ranking means much more exposure for local businesses, which can result in thousands of additional clicks from potential customers and lots of new visitors coming to their sites.

How much more attention a business appearing in the Snack Pack can attract depends on a variety of factors, such as the number and quality of Google reviews and competition strength. Tests have shown that click-through rates for Snack Pack listings can range from 8% all the way up to 44%.

In addition to that, any business listed in the top 3 local search results will likely be perceived as more authoritative, which is useful if you try to increase brand awareness and want to position yourself as a market or industry expert. From a user perspective, it makes a lot of sense to connect with established businesses that are well-known.

If your business does not rank in the local Snack Pack at this point, there is a lot of potential left for you to exploit. A Snack Pack listing does not only mean hundreds or even thousands of new potential clients becoming aware of your business, but it also increases industry authority.